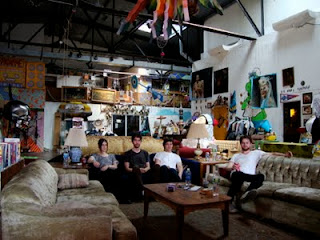 Tracking for the new Darlings LP

Sorry for this belated post! In early august, Darlings from NY came down to track their newest LP. It was hard work and lots of fun/We had a whole week to work, which was great, because it gave us just enough time to take time to get the right sounds for everything, as well as be meticulous about what takes we wanted to keep. Peter and I had a few different phone conversations in the months leading up to the session to figure out how much time was needed and how exactly how we were going to record. Here’s what we came up with. We spent the first 2 days tracking drums. Below is a picture of us testing out which kick drum we wanted to build the drum kit around (slingerland, and 2 ludwigs from left to right). Matt, the drummer, wanted a roomy sound, so we put the royer on the other side of the room, and tracked bass along with the drums with the amp out in the garage for separation.

We then experimented with a few different guitar sounds, but ended up splitting the guitar between two amps and blending that sound together as the main guitar sound; one being an overdriven doctor z combo, and a 60s bassman cranked all the way with a pharaoh fuzz pedal. After 2 days of just guitar, we started alternating between guitar keys and vox, so while something was being tracked, Alex (my assistant) could go in the other room and compile vocal takes with the other band members. It was a super efficient way to work and both the band and I were very pleased with how it turned out. I’ll post a song as soon as the record comes out (which should be in the next couple months). 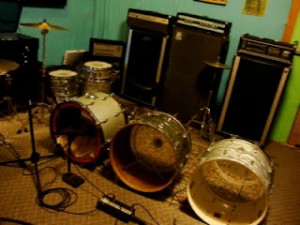 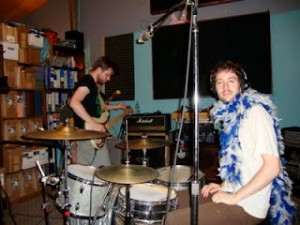