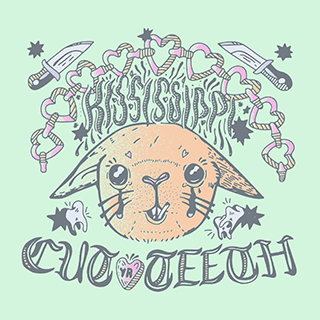 New Kississippi Single! Signing announcement to Side One Dummy Records

Its been a little bit of a journey, but I’m so proud to announce that the first single from Kississippi on Side One Dummy records is out!

Kississippi, the moniker of Zoe Reynolds, has been playing around Philly basements and clubs (and across the country) for a few years now. I had heard a song of Zoe’s a really long time ago, and felt a real connection to her music, and just followed her progress from doing self-recorded laptop demos to her debut EP “We Have No Future, We’re All Doomed”. A little while after its release, Zoe was having trouble finding permanent members in her band instead of people who could fill in on a tour (she never stopped touring!), or really jam on the new material she was writing. However, her demos she was making in garageband were amazing! You could really her the spirit of the songs through the lo-fi haze. We started this record not in The Headroom Studio, but in my kitchen; programming drums, importing garageband loops from her laptop and passing my rickenbacker back and forth coming up with an arrangement for a full band. There’s actually a lot of stuff from her original garage band demos that made it on the record!! Once we knew how the songs were supposed to go, we had the drummer from Thin Lips, Michael Tashjian, come in and replace most of the programmed drums (we kept some programmed) and add some live rock vibe to the songs (by hitting out c and c kit as hard as he could!). Then Zoe and I took turns replacing most of the demo guitars and synth in the studio (and some still in my kitchen!) After the record was done, Zoe showed it to a few people and found a home for it at Side One Dummy, who were very excited about the record!!! And now a single and a release date!

Liste to the first single Here